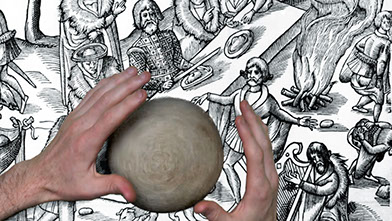 It is probable that we shall never discover origins of the bardic schools of Ireland. Perhaps they began in prehistoric times, giving the structure and purpose to verse and rhyme, to find joy and critique in the language, sounds and voices of all living creatures. Such noble aims had precise approaches - it is said observing the movement of birds in the sky could help divine the future. Chewing pork helped too. The most committed bards are recorded as shutting their doors and windows, to lie on their backs with a stone upon their belly. Then, with their eyes closed, they would pump their brains to find rhetorical flourishes for their verses. They roamed from place to place, with what was described as a ‘wonderful mouth’, able to recite, to sooth and to heal with the words that came out of it.

Over time, such abilities began to fade. In the harsh late medieval society of Ireland, many bards had to resort to compose lampoons and cheap satire, rather than highfalutin verse, to make a living. By 1581 John Derricke’s monoprint depicted bards at a chieftain’s drunken feast. They each appear with their trousers pulled down, devoid of any intellectual merit, farting into the fire as a rude joke for all present. With the great social upheaval of Catholic rebellion in 1641 and Cromwellian invasion soon after, few were left to continue the tradition.

In many accounts, bardic culture also believed in reincaration. Accordingly, in A Murmur, Repeated, time travel and spirit possession drive a surreal narrative where a bard from seventeenth century Ireland re-appears in English port city Southampton and nearby Stonehenge. In this journey, actors Gina Moxley and Timmy Creed encounter the empty car park of an out-of-business Toys R Us, cheap Amazon-ordered fancy dress costumes, budget hotels and a sprawling heritage industry surrounding the Neolithic landscape.

What would a lost poetic mind of medieval times make of 2019? Caught between a desire to fit into the constraints of the contemporary world and the seemingly liberal possibilities of a more poetic, distant life of the past, A Murmur, Repeated’s central characters grapple with the construction of public space and the role of history in life today. 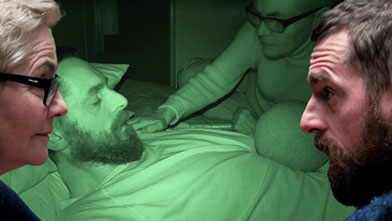 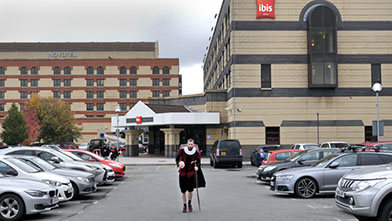 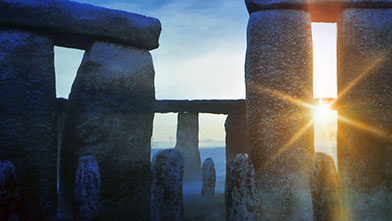