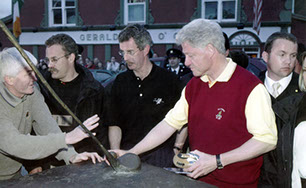 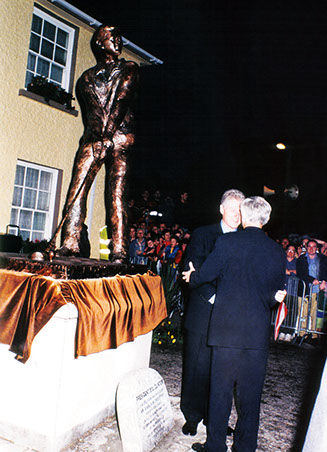 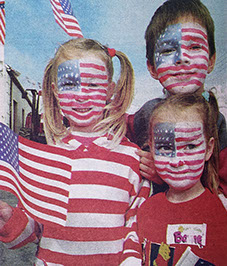 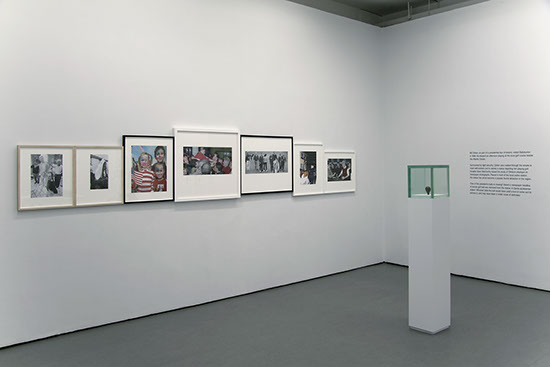 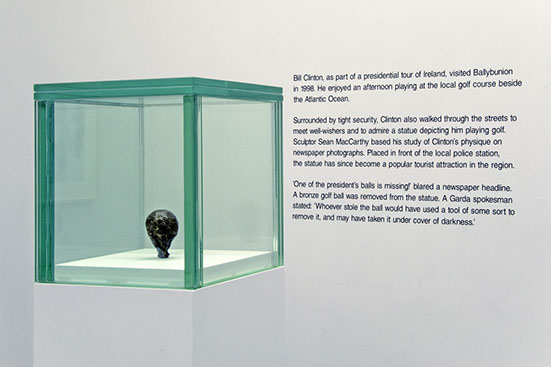 Photographs, wall text, fragment of a bronze statue in a bulletproof glass case

Bill Clinton, as part of a presidential tour of Ireland, visited Ballybunion in 1998. He enjoyed an afternoon at the local golf course beside the Atlantic Ocean before walking through the streets to meet well-wishers, and admiring a statue depicting him playing golf. Based on newspaper photographs, a bronze effigy could not be completed in time, so a full-size plaster mockup spray-painted a majestic deep gold was unveiled before him. After leaving office, Clinton returned to see the completed version, placed in front of the local Garda station where the two primary roads of the town converge – his bum in baggy golf slacks is one of the first views to be seen when entering Ballybunion.

An installation features images of Clinton’s visits alongside the bronze golf ball that once was found at the base of the plinth – an act of vandalism in 2005 saw it removed and stolen, an event gleefully featured in the tabloid press of the time. ‘One of the president’s balls is missing!’ blared a newspaper headline. A Garda spokesman stated, ‘Whoever stole the ball would have used a tool of some sort to remove it and may have taken it under cover of darkness.’

The statue, still without a golf ball today, is one of a long line of what are often cringeworthy tributes in Ireland to American presidents, such as the John F. Kennedy mosaic in Galway Cathedral or Patrick Hennessy’s paintings of his Irish visit that fetch up to $100,000 on the secondary art market. An entrepreneurial impulse saw pieces of earth from Ballyporeen (Ronald Reagan’s ancestral home) packaged and sold to avid Republicans, while the interior of the pub Reagan drank in during his 1984 visit was later shipped and reassembled in California.

These tendencies have recently reached more sycophantic levels, as the Barrack Obama Plaza motorway stop at Moneygall attests to. Opened following a visit to his distant relatives, a gesture intended to boost the Irish American vote during 2012’s presidential campaign, images of Obama adorn the walls of the foodcourt and drive-thru fast food outlet, and a variety of commemorative merchandise can be purchased. A dedicated museum to the event features a glass that looks like the glass that Obama had a drink of stout out of in a local bar. His secret service refused to give the original pint glass to the town because of security risks – the president’s DNA could potentially be extracted from it.